Well here I am again, being a shut in (sortof) due to COVID, during Halloween, I am thinking, Harry Potter.  It’s been SO long since I have written anything but I took a stab at it tonight.

I wrote about it a few years ago, admiring a Harry Potter themed wedding.

When the books came out, I would organize book releases at Barnes and Noble at midnight, inviting other moms who were nuts like me to allow our primary school kids out late at night to the launch.  We would decorate our vans, aka Halloween-style, and allow our hyped up kids munch on delights that other moms created like “potion” punch or purple chocolate “dragons” and so forth. It was a mad house in the store but they were so excited to grab their first “copies.”

I credit JK Rowling for making my kids voracious readers, particularly the younger one.   Teddy was so enamored by Harry Potter and we knew it was the motivator to make reading an everyday occurrence.  In fact, when small, just about three and six, Teddy loved to have us read to him and brother Bill and couldn’t wait for the nightly sit down.  A few years later and lots of practice (Teddy was reading at 22 months), in Kindergarten and 3rd grade, they both were reading the latest books on their own.  By then, Billy needed little help but we would curl up and read the newest Harry Potter book came out.  The bad mother that I was, (tee hee hee) at aged five, we took both our kids to Barnes and Nobel at Midnight to get the latest book, Volume 2.  It was a huge deal and  ……….

Later, a few volumes later, the kids would fight over who had first “dibs” at the book those launch nights. One particular volume, Teddy won and got the book first that launch night. He was pretty excited and soon our weekly trips to anywhere would land us at a LEGO store to get the newest additions until our table grew with longer boards. Our tudor house was the PERFECT setting for their room. 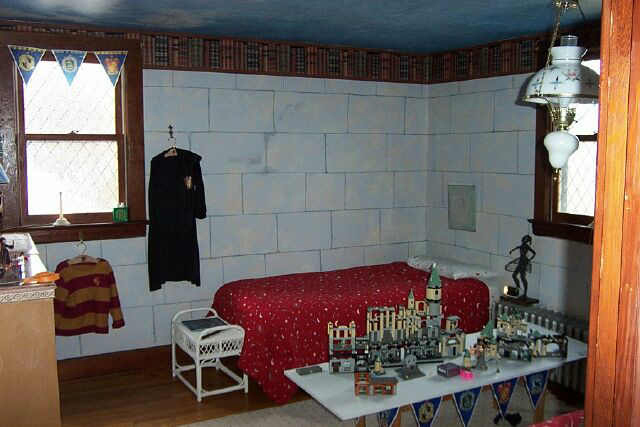 By the time we moved to Florida, even the mere TALK that Universal would open “Harry Potter” land, well they were besides themselves. Although Bill was a bit older and ready to have his own room decorated his own way, Teddy still chose to go the Harry Potter route.  I found this pretty cool pain that was STONE PAIN and we got him a good start on decorating his room. Once again, we went to the Orlando B&N Launch for Harry Potter “Order of the Phoenix “.  It was now the little guy’s first crack at the book.  That night, he scurried up to his loft, now filled with dragons and Harry Potter paraphernalia and decor.  Early the next morning, out from the covers, Teddy pronounced “I’m finished Mom, you can read it now”.m tossing the book my way. Yep, that’s right – Teddy finished all 870 pages of Harry Potter V in one night as a 3rd grader; he was zonked for the entire weekend. 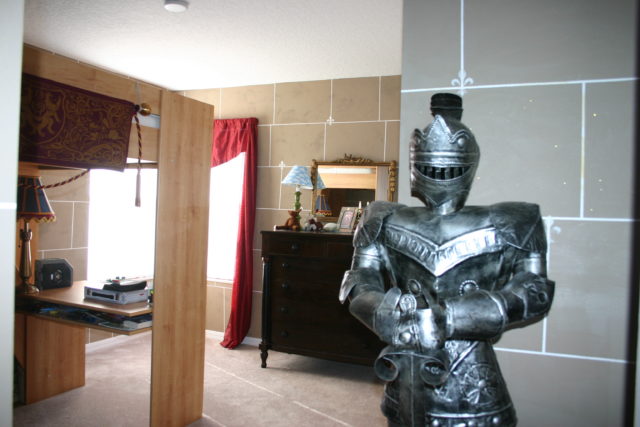 Kind of hard to believe now, I actually have a 2, almost 3 year old grand child and truly hope that before they ever let her see the movies, they read the volumes to her as we know these books really made my kids crazy about reading.  Part of Pegeen.com Collection of Princess Everyday, here is our Wizard Dress 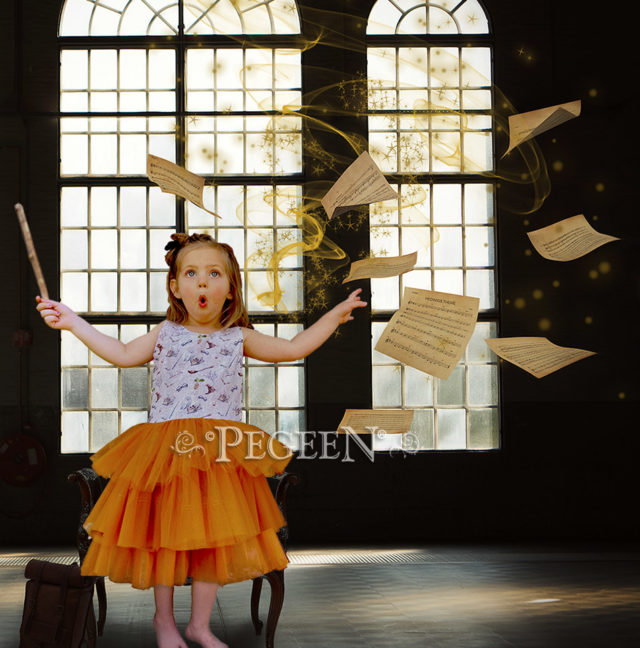