My husband and I recently celebrated 30 years together . Funny how I think that time stood still yet time flew by. Sometimes I feel like I am this entity that has messed everything up – like would have, should have and then, I remember, I did everything okay.  What is often said about mommy guilt is true, no matter what you do, you are definitely sure you screwed up your kid’s life.

It used to be that women wanted to have it all – those who influenced my generation were people like Gloria Steinhem, Shirley Chisholm, and to a smaller extent, Oprah Winfrey. But my personal role model was my mother, who made everything fun yet always believed in me and my father who, no matter how busy building his own law and political career, always seemed to stop when we ran into the room.  He also taught me to be a voracious reader from an early age. When kids my age were reading Nancy Drew,  I started on the Presidents and their families (probably because of his involvement in politics) and then moved onto the great industrialists. I read everything about the “big families”, the Vanderbilt’s, Mellon’s, Carnegie, Astor, Duke, Morgan, Rockefeller, Stanford, Flagler, Frick, Hilton and so many more.  I was particularly fascinated about how so many of their wives also became strong arms to their business entities. My dad always got a kick out of me knowing so much about all these families and how these companies grew.  I still remember going into our small-town library with it’s musty smell reading about these great business leaders. Trust me, I was just as interested in reading about Mrs. Astor’s First Four-Hundred as the reasons for the boom of Florida (via Flagler, Plant and Chipley).

Running a company was empowering. Wanting to “be the boss of my booth”, as my then- 6-year-old son whose concept of business was a 15×30 foot booth at the Jacob Javits Center where you were in charge, was what drove me. My father was a strong influence in my life – not for the patience that he showed us when he got home from work but from the deals and the meetings that he would have and how he could remember everyone’s name. It also felt as the time we spent with him as a busy father was very heartfelt.  I wrapped up what he taught me, what my then 60’s values were growing up and translated it into the business I have now.  I used to tell my employees that having the chance to run over to their children’s school play was just as important as getting deliveries out, embracing your kid home from college by taking off an extra day or two was exactly what they needed to have a profound effect on their child’s well-being.  All the while, I don’t know how I “picked” such a great husband but I am so lucky to have chosen the prefect compliment to my strengths and one that had no difficulty taking a back seat to my strong personality while still maintaining his.

My son, the oldest, also pursued a career in entrepreneurship. He went to business school and I will never forget, he asked me once, “Mom, why do you do this day in and day out?” My answer was simple. “I love it Billy, I love being the boss of my booth”. For the most part, it is fun and interesting and empowering. But it takes a special spouse to put up with it. Like my aunt who owned one of the largest dance schools in the east coast, I always wondered, did my Uncle Johnny mind being called Mr. Marcia? Its the same thing for me too. How do couples work together everyday without killing each other? Still show respect at the end of the day, especially when the woman is the boss? How did these things affect my children? I always worried, would they adjust to strong women or hate them?

I suffered from so much mommy guilt as if I didn’t give my two children enough of me and now that I am this “empty nester”, I realize, I gave them so much.  These two great kids also gave me more. Working for myself has been hard at times and infrequently a strain on our marriage.  But the one thing I know, even though I was positive that I destroyed my kids life at times with the long hours and role reversal, I enriched theirs by giving them a strong role model for women.  I am beginning to see that what they learned is, that to be in love, is to find a partner who is just that – a partner.  Someone to share decisions with, even when it is not easy to express the opposite opinion – to work out the kinks in daily life and to change the idea of normal roles for a mom and dad – these were the things that were important for my husband and I to teach our children.  I think this valuable lesson about having the right partner, I learned, made it easier to deal with my tremendous mommy guilt.  Photo c2009 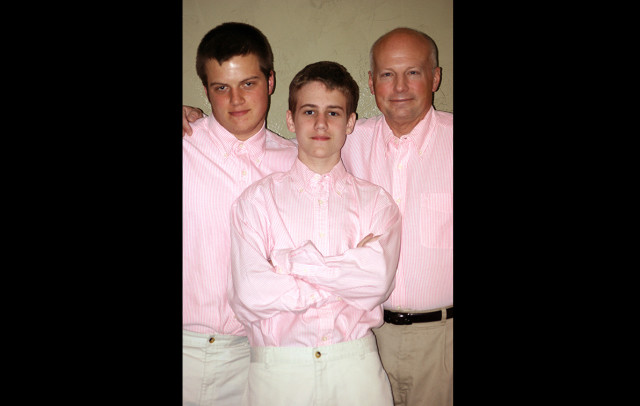